I dreamt I was home at my childhood home.  I saw that a couple were walking through the property at the base of the steps where I used to eat pomegranates and spit out the seeds.  I went up to them and told them they were walking through our property and should leave.  But a short while later (or perhaps even as I turned back to the patio, the property was filled with people.  These were not sinister people, nor apparently homeless, but they were people who had decided that being on our property was a good thing.  There was a man with a dromedary camel, there were young people and older.  Some may have been indigent.  I even saw that out near the corral, there were a few small tables and people gathered as though it were a cafe.  In exasperation I told them I was calling the police.  I fumbled with my phone and had to go inside so Maya could help me dial 911.  In time a single policeman arrived and he and I walked around together, rousting people and telling them they had to leave.  By now the camel was in a makeshift stall in the garage.  The garage was further equipped with small lofted rooms, each of which contained sleeping or resting people.  I did get mad at one man for smoking.  When the policeman and I went back out to the patio, I saw that the windows had all been covered with burlap or thatch in an effort, I suppose, to protect our privacy.  Although a moment later those coverings were gone, as though my dream author decided that was a bad move and edited them.  Gradually we seemed to get most of the people to move on, though the policeman and I agreed that they would probably be back.  I remember walking up the steps toward the dichondra lawn and the patio.  The tree that my parents had planted when we first moved there was gone and I remember thinking I would have to replace it with a new tree.

More of my mother's words

Somewhere in the tumulous, the cumulous,
the ramble of my…

The currency of current affairs
is flame

the reason—lobe of the brain…

throwers of the flame are also
subject to its destruction

This is a jotted poem on scrap paper by mom, undated (but late). I started to add the word “mind” to the end of the second line, but realized that it not being there was likely the point.  Moreover the ellipsis is there in her hand.
Posted by Ask Me Now at 9:35 AM No comments: 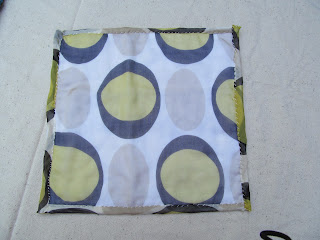 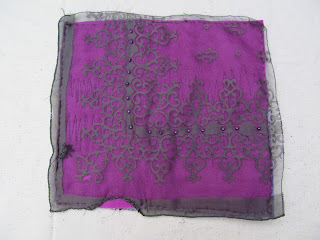 I am reviving my blog.  I once had the thought to transcribe my journal  entries from my last Africa trip but it was too overwhelming.  The impetus today is to have a place for the pieces I create for the Bead Journal Project 2013.  With that in mind, I am also going to post the 4 pieces I did in 2010-11.  They tell the story, to some extent, of my year with cancer and my mother's decline and death.  I look forward to telling other stories in 2013.
Posted by Ask Me Now at 8:13 PM No comments: 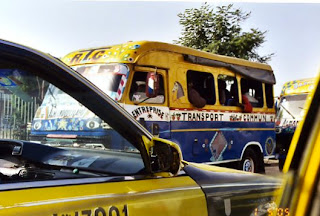 The embassy appointment went as it had been described to me:  Yusupha is inadmissible and we have to get the grounds of inadmissibility waived.  It was all expectedly byzantine and, dare I say, Kafkaesque.  So since Kafka covered that topic far better than I could, I will describe Dakar--decidedly not Kafkaesque though it is many others things and much more. 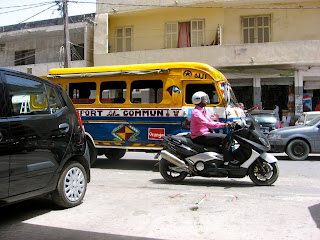 My favorite part is walking around off the main thoroughfares.  They are so intense, all those hard-eyed drivers who scoff at pedestrians in those multitudes of yellow-and-black taxis, the sides of which are a patina of dents and scrapes.  Traffic is a free-for-all in which pedestrians do not have a right of way, even in a cross-walk, of which there are some.  There are no lane lines and so street lights or stop signs.  The main streets are full of taxis, private cars, buses, the colorful open vans run by the muslim brotherhoods, horse drawn carts, man-drawn carts, motorcycles, a few bicycles, and even, occasionally, a cluster of in-line skaters.  Crossing the streets calls for bravery and attention.  I personally clutch Yusupha's elbow and try not to look.
Posted by Ask Me Now at 8:17 AM 1 comment: 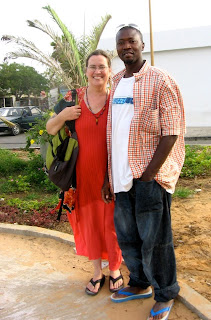 May 31, 2010
The purpose of this trip to Dakar was to go to Yusupha's immigration interview with him. The whole heart of the trip was to be with him, with my husband from whom I have been separated by US immigration since July 2009. We hoped to do our business in Dakar and then go to the Gambia and even to Allunhari to see the rest of the family, who I have not seen since 2005. Yusupha hoped, believed that he would be granted the visa at the interview. I knew from talking to our lawyer that that was unlikely because of the deportation and the need for waivers of the grounds of inadmissibility that obtain in spite of our 8 year marriage.
Since the interview came up on such short notice, I was unable to get a Gambian visa before coming. So on our first day in Dakar we went to the Gambian Embassy and I got that visa. I'm pretty sick of bureaucrats of all nationalities and their language and their red tape. But the encounter at the Gambian Embassy was almost funny. Behind the glass was a surly French-speaking woman who mumbled. I filled out the form and when I returned it to her, through the slot in the glass, she would not extend her hand to grasp it forcing me to push it further toward her. Nor was there any other trace of courtesy or recognition. It's one of the things that Yusupha gives me: The calm not to react, or if I react (as invariably I do) not to retaliate, as in: You dumb bitch, didn't anyone ever tell you about customer service...
Our interview was the next day and it went as it had been described to me by our paralegal. The officer said that based on the marriage, which she did not doubt, she would grant the visa. But, she said, "the way the process works..." Moreover, we would need to refile and repay (another grand) for the two documents. It was a blow to Yusupha and although I expected this outcome it hurts to be unable to protect him, to watch him suffer.
He is my love, the partner of my life.
Posted by Ask Me Now at 4:30 PM No comments: 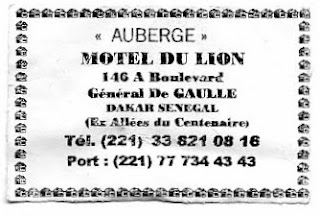 May 31, 2010
From the plane through customs at the Dakar airport was trying. So incredibly tired. And it's hot. And I was so close to Yusupha, somewhere outside in the crush of people and taxis, but stuck in the incoherence of lines and official procedure--granted that in Dakar the whole thing is more low fi than in the US. When I finally emerged with my suitcase, there was an open area with barriers beyond which people were waiting. I was at once being warmly solicited by a man assisting with my bags, offered calling cards and money changing services, while scanning the crowd: Yusupha waved and smiled and at last we are together again. It has been almost 11 months.
Yusupha, ever the economizer, had a friend who had recommended a particular hotel, cheaper even than the Auberge du Lion of our previous visit. But he said if I didn't like it we could move. Since by now I'm barely functional in any language and Yusupha doesn't really speak Wolof, it took awhile to find the place. We checked in and Yusupha had to agree it that it was barely acceptable. There was a cover on the bed but no sheets. There was a toilet and across from that a stall shower, with a sink in the stall. Below a painted over window was a wheezing but not totally ineffective air conditioning unit. We decided to sleep there that night at least. What seemed barely adequate however proved shortly to be entirely inadequate as the nightclub adjacent fired up the music which continued until dawn.
The next morning we returned to the Auberge du Lion and after a day of sleeping I felt somewhere back toward normal.
Posted by Ask Me Now at 10:50 AM No comments:

Ask Me Now
Seattle, Washington, United States
I have a room with a view, a beautiful daughter and a kind and tolerant husband. We have three cats, Chula, Halo, and Weezy, and one chinchilla, Ziggy. I hope to have chickens and rabbits soon. I want to travel more before I depart this mortal coil. I am a reader and I practice all the fiber arts--except weaving. At least so far.